Beirut, you beaut. It’s been a few months since we went to Lebanon’s capital city for a long weekend, but I can’t get it out of my head. 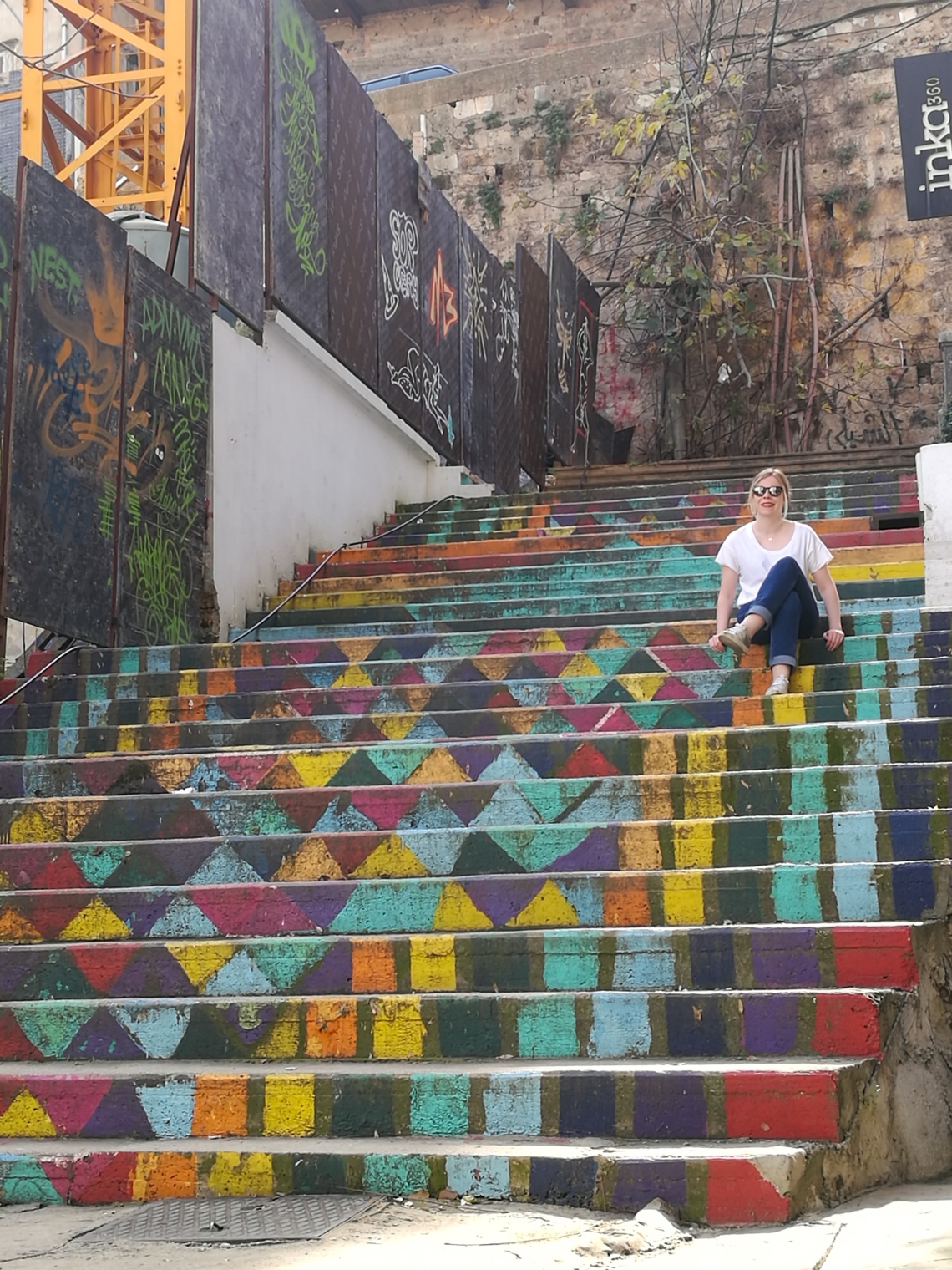 I didn’t quite know what to expect. While many people in Dubai rave about Beirut, I was a little nervous. I spent more time than I care to admit comparing the travel advice for Lebanon on different government websites, and insisted on purchasing the highest level of insurance cover. What can I say, I’m risk-averse.

Turns out, I didn’t need to worry. There were surprises around every corner in Beirut – but mostly good ones. Here is my first-timer’s guide to the city. 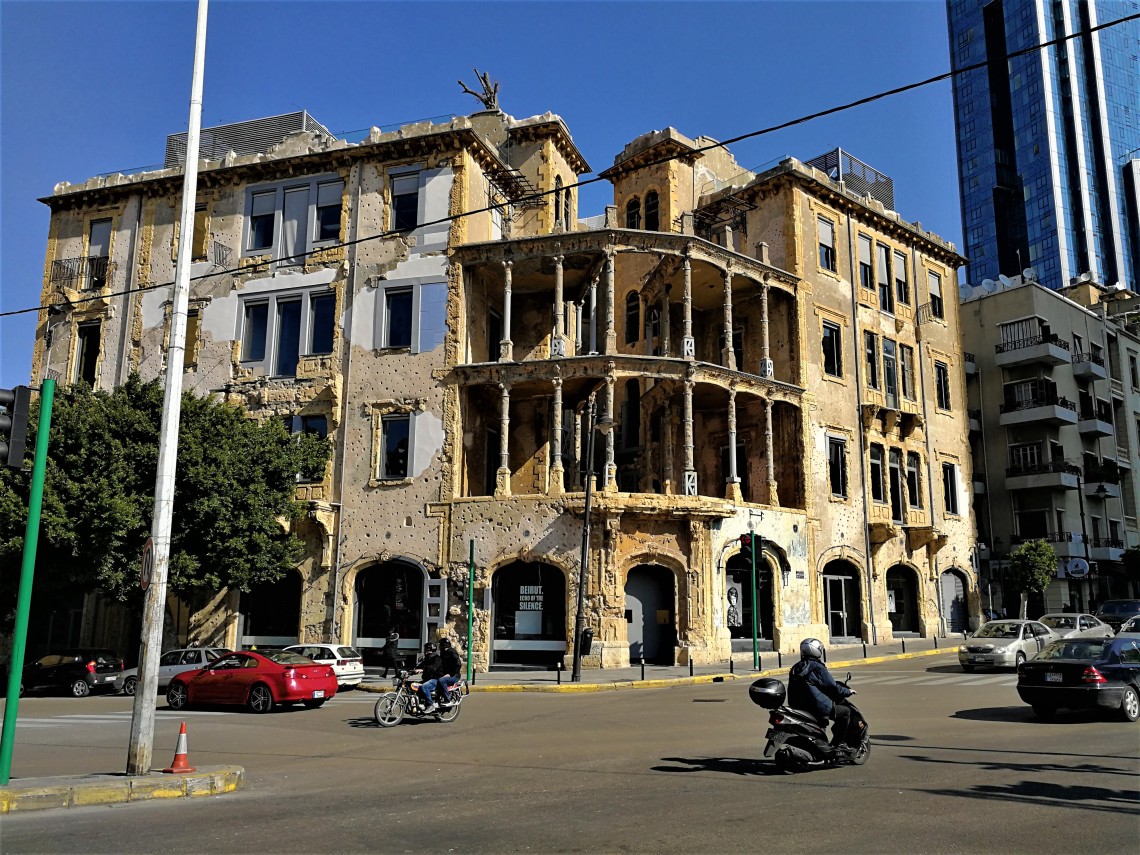 We flew with Emirates, and it cost around AED1000 each return (they were having a sale when we bought our flights). It’s about a four-hour direct flight from Dubai.

The official currency is the Lebanese pound but they also use US dollars. In fact, sometimes you pay in one currency and receive change back in the other. It’s a bit hectic. The smart thing to do is to bring some of both to cover your bases.

Getting from the airport to the hotel was a weird experience. Before we got in the taxi, an armed officer wrote down our name and destination. Which didn’t exactly bode well. But we made it to our hotel in one piece, despite having our first taste of Beirut’s notorious traffic (more on that soon).

We stayed at The Smallville Hotel in the hip suburb of Badaro, which cost us just over US$500 for four nights. It’s billed as an “urban design hotel”, and there were plenty of fun touches, like boardgames in the lobby lounge and a secret garden-themed bar. Our premium king room was stylish and cosy and had great city views from the little balcony. The only downside was that it stank of cigarette smoke – and when we complained, staff attempted to disguise it with a can of Febreze. Thumbs down. 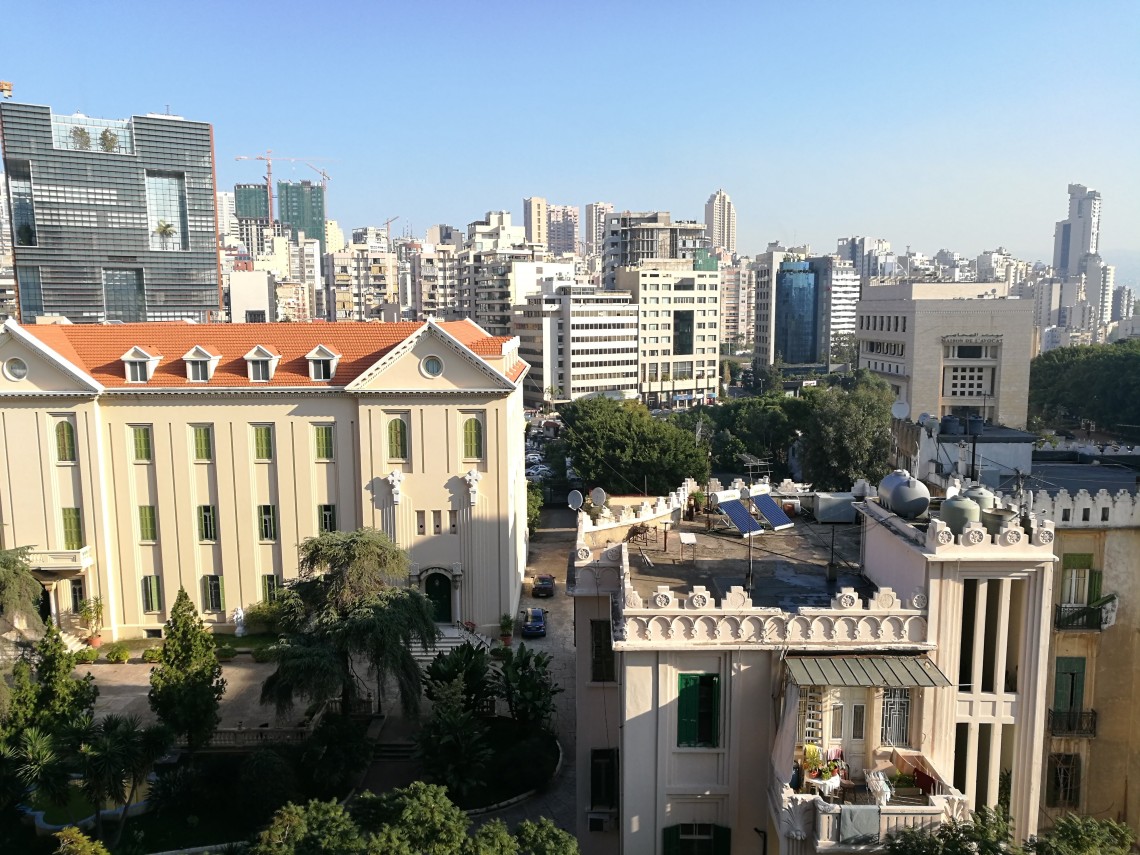 Still, the location was brilliant. The National Museum of Beirut was about a five-minute walk up the road, and everywhere else you’d want to visit was no more than a 15-minute Uber ride away. After-dark, Badaro comes to life, packed with quirky little cocktail bars and hipster hangouts. We even found a microbrewery.

We found Beirut to be surprisingly walkable, even though we took our lives into our hands at every so-called pedestrian crossing. Trust no one – but especially not the scooters.

The taxi situation seemed like too much of a headache to navigate, so we just used Uber the whole time. It was very affordable – most fares were well under $10. I will never forget one particular driver who picked us up; he held a fat cigar between his fingers as he drove (but never smoked it) and blasted sick club beats at full volume, even though it was like 9.30am. I made sure to leave him the “awesome music” compliment. 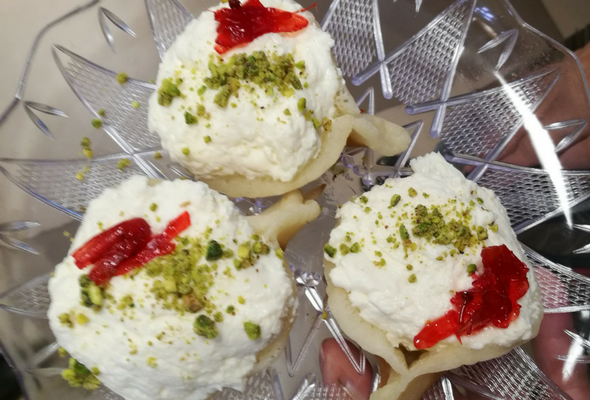 I’m a big fan of food tours, and this one was particularly good. Founded by Lebanese food blogger and cookbook author Bethany Kehdy, Taste Lebanon offers culinary journeys all over the country, including a one-day Beirut Bites walking tour. At US$350 for the two of us, it was by far the priciest thing we did – but trust me, it was worth every cent. Over the course of seven hours, our wonderful guide Iffat took us to hole-in-the-wall bakeries, shawarma joints, and even a legendary ice cream shop (my favourite). We ventured to places we wouldn’t have found on our own, like Bourj Hammoud, Beirut’s Armenian district. Really, it was so much more than a food tour. Between bites, we absorbed history, culture and architecture. I recommend doing this tour on your first day in Beirut – it was a fantastic introduction to the city, and we were inspired to re-visit many of the areas we passed through on the tour. 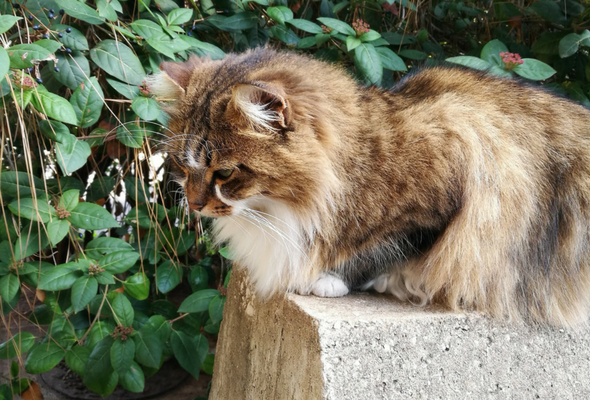 It might sound like an odd attraction, but wandering through this campus was one of my highlights of the whole trip. For one thing, it’s very beautiful – all lush and green with spectacular views of the Mediterranean Sea. But that’s not even the best part. AUB is home to dozens of cats. Apparently during the Civil War, people fleeing the country would drop their pet cats at the campus, thinking it would be a safe place for them. Volunteers started feeding them, and well, they never left. The cats we saw didn’t at all look like sad strays – they seemed perfectly content, roaming about the campus and napping in patches of sun like they owned the place. I like to imagine that after the students have finished for the day, the cats all slink into the lecture theatres and hold their own classes (purrfessors, obviously). I think I feel a children’s book coming on… 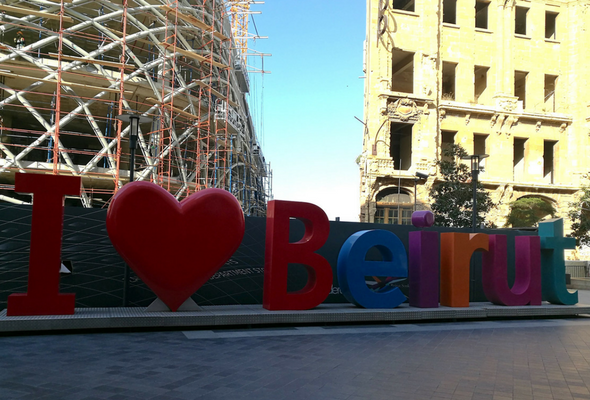 I was determined that I wasn’t going to do any shopping on this trip, but one thing led to another and one afternoon we found ourselves in Beirut Souks, a huge luxury shopping area in the Central District. It’s nothing like a traditional Middle Eastern market – this is a completely modern reimagining of a souk, with elegant architecture and designer brands. It’s a nice place to kill an hour or two with some window-shopping, but sadly, it felt a little bit like a ghost town – there were more soldiers on the streets than shoppers. 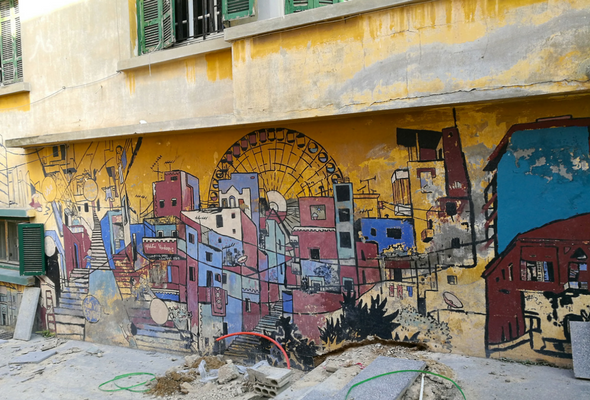 Mar Mikhael reminded me a little of Newtown in Wellington. The neighbourhood used to be an industrial area, but the cheap rents attracted all sorts of creative types who set up quirky cafes and shops, and it soon became something of a hipster hotspot. The area is also famous for its street art – especially its Instagram-worthy multi-coloured steps. Cool places to check out include gallery/design store Plan Bey, cafe and micro-roastery Kalei Coffee Co., and sourdough specialist Tusk Bakery.

If you only eat at one restaurant in Beirut, make sure it’s Tawlet in Mar Mikhael. This place is only open for lunch, but it’s worth planning your day around it. Every day, a different cook (usually women) from a different part of Lebanon takes over the kitchen, preparing a buffet of traditional Levantine dishes. 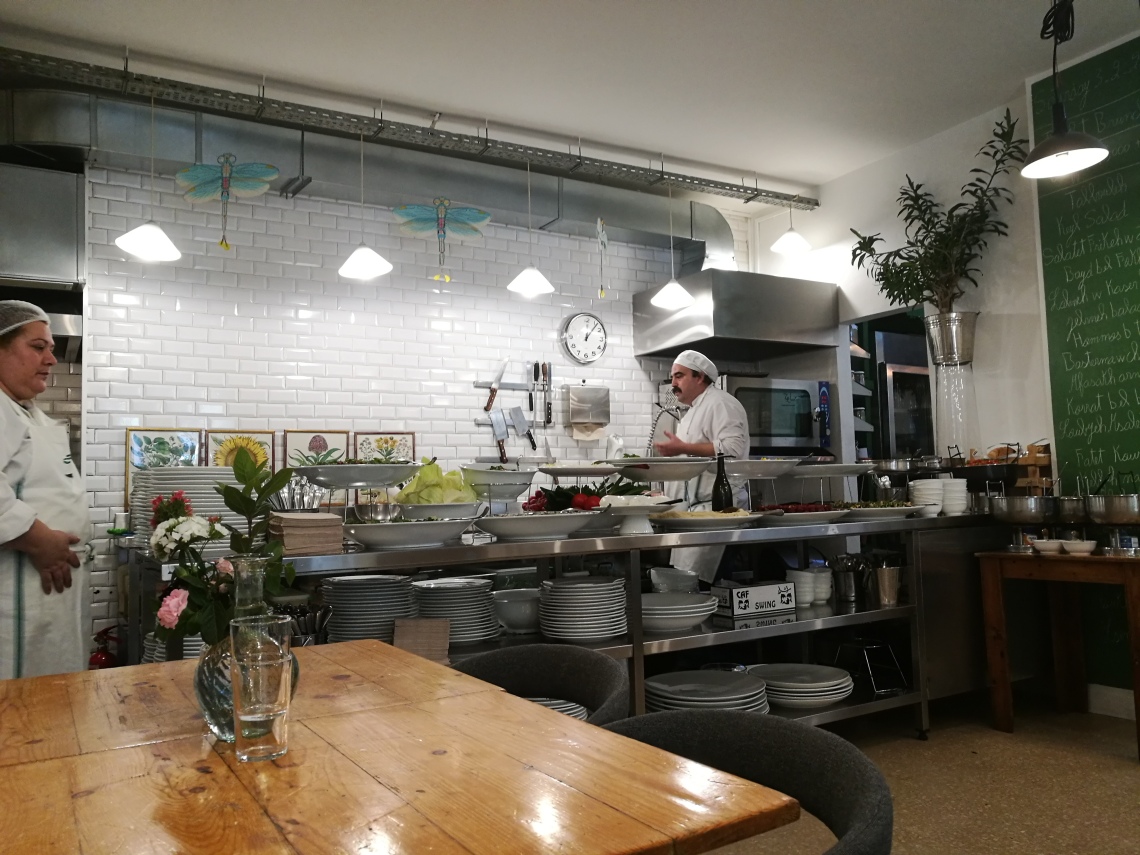 We went along for Saturday brunch, and for LBP45,000 enjoyed a beautiful spread of fresh salad and mezze, washed down with lip-smackingly sweet rosewater. If I lived in Beirut, I would go there every week.

In Badaro, the area we were staying, there was a brilliant Armenian-Lebanese restaurant called Onno. I had never tasted Armenian food before, but one dish I won’t be forgetting in a hurry is manti – little meat dumplings covered in yoghurt and mixed through with tomato sauce. It was the ultimate comfort food. They sort of reminded me of tiny mince pies.

Another good find in Badaro was Don Baker, a tiny pizzeria. It seemed to be more of a takeaway place, but we ate there one night and it was lovely and cosy, and the pizza was awesome. 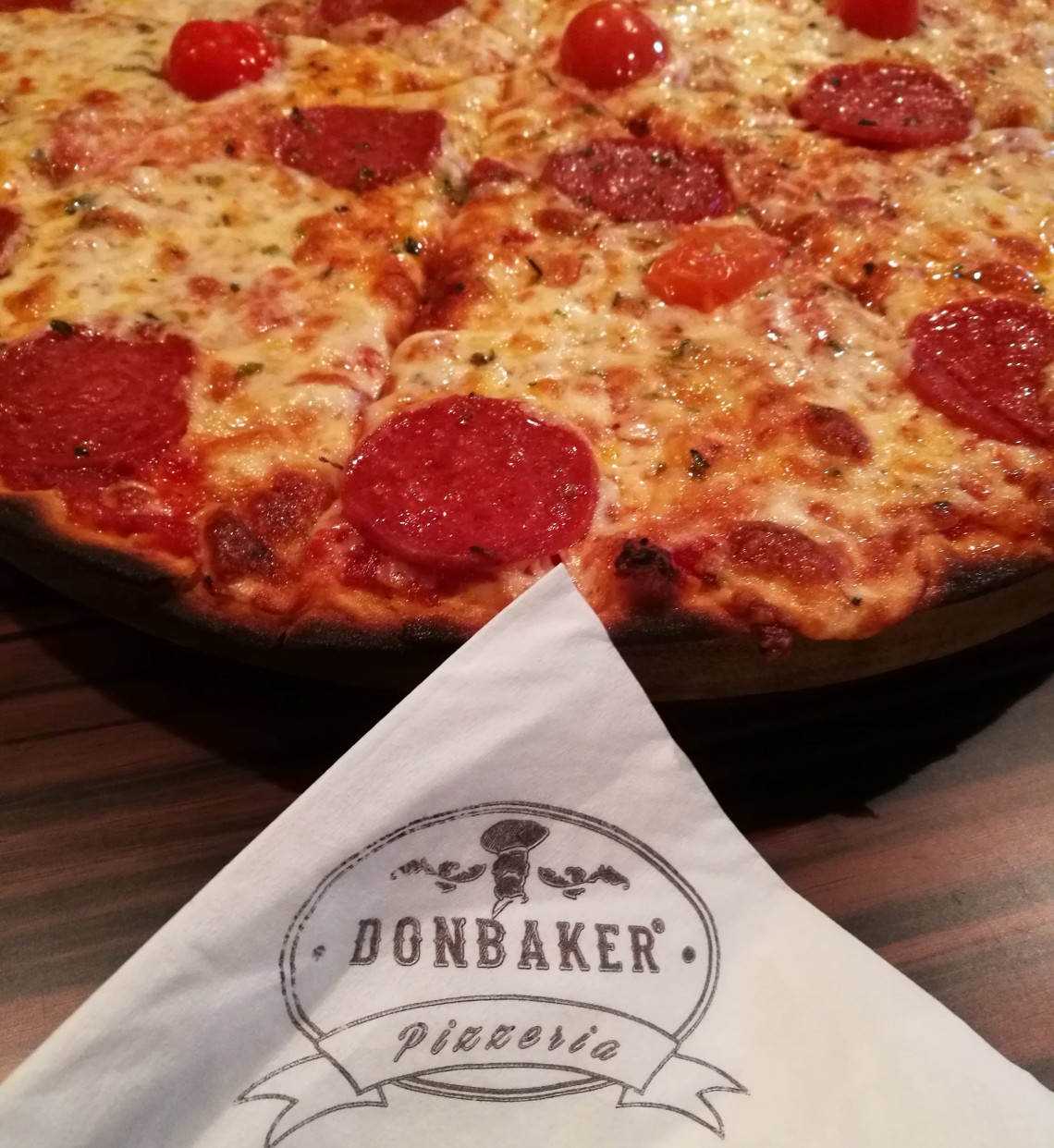 So. There goes my whirlwind tour of Beirut. It’s a place I never thought I’d end up visiting – but I’m so glad I did. If you’re interested, you can read more about my trip in this travel feature I wrote for Stuff.